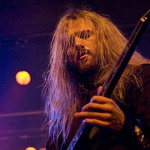 Few modern bands as worthy of the definitions of “epic,” “legendary,” “ambitious”, the Swedish metal band Therion. Once people hear their music is not likely, ever forget it – and no wonder: Symphony Orchestra, guest vocalists and at the same heavy sound multiplied by the complex and beautiful music and profound lyrics leave no one indifferent. In connection with the release of new album Sira Ahra permanent leader and composer Christopher Jonsson  gave an exclusive interview to Metalscript.Net.

Every Therion album has smth conceptual in it’s content. What will be the conception of Sitra Ahra?

There’s some, but we don’t want to reveal that at this point.

“Sitra Ahra” is a cabbalistic term – what does it mean?

Literally it means “the other side”.

Why has it been chosen for album’s name?

There’s not always an intellectually defined “why” involved in every decision you take. When the rain falls upon the mountain, the water finds its way down to the valley without a lot of philosophical bothers.

Will be there something new in musical plan we can here in “Sitra Ahra”?

The album offers many things we didn’t experiment with before. But it has always been our policy never to comment the music on new records before the promotional copies of the CD has been posted to journalists.

The only thing we have revealed so far is that the majority of the songs comes from the same pool of songs that Lemuria and Sirius B came from and that it has more long and complex songs than usual.

The sounding of Therion becomes more and more symphonic from album to album and now has not so much in common with traditional “metal” sounding. Are there any plans to enlarge symphonic part and became non-metal band? Turn into real orchestral project?

I’ve had that question before and I find it very weird actually. What do you suggest all the members in the band who play rock instruments would do if all music were orchestral? Get fired? If everyone (but me) got fired and I would only write classical music and opera, why on earth would I insist calling that Therion, the name of a band who made 14 metal albums??!?

The question should rather be “could you consider making pure orchestral/operatic music without any rock instruments?”. The answer to that is “Yes, I’ve been writing on an opera for some years. But I find it unlikely I would  give up Therion for that sake”.

Therion’s music is high technical and rather difficult to perform – what’s more difficult – to compose such a music or to rehearse it?

Depends on what your talent is. For me who is a composer, the song writing comes natural, it just flows out of me like a river. But I never practice guitar, so before a new tour I always have a lot of catch up to do. So for me personally it’s a much higher effort being an instrumentalist. For a lot of other guys in the band over the years it has been totally opposite though, they practice several hours a day and it’s easy to play for them, but demands much efforts to be able to write music.

There are not any bands with music close to Therion. Do you feel unique? Can you say the Therion is a happening in contemporary musical world?

Yes and no. There’s no other band that do precisely what we do. But at the same time it’s important to remember that we never invented the wheel and the fire from scratch, everything always comes from somewhere and everything you hear from artists today is a link in the chain going all the way back to the first cave man that made a drum out of the skin from some animal he killed. Therion is a product of many contents and if I may analyze it myself it would be a rather complex story. But to give you a clue:

There was a band in Canada in the 70’s called Klaatu. They did some albums that were all not that fantastic, but their second album called “Hope” was one of the best albums of the 70’s. Even though it may not sound much like Therion (though it is very orchestral too), you can hear that the way of thinking has been a big inspiration for Therion. Then there was another band called Pavlov’s Dog that made very sad progressive rock, the mood from this band is an important part as well. Then the neoclassical rock influence of Uli Jon Roth, The heavy metal bands we grew up with (Accept, Iron Maiden, Judas Priest), the epic songs from the 70’s by Uriah Heep (if it wasn’t for the love of that band I’d never used Hammond organ for example), Voivod and other bands have all made their part for the rock/metal fundament of the band. 70’s Scorpions is much responsible for the twin guitar harmonies. The death metal period I had made it’s clear marksThen you have classical music and opera (mainly Richard Wagner) that have played an obvious role as well. And various folk music from the Middle East and Europe have also been a vital part.

I think what truly makes Therion special is that the music is a spontaneous creation. I know many bands are trying to be original on purpose. It’s not really the same thing. It’s like when stories are told in novels (books). All the greatest classic written are products of spontaneous imagination of writers. You can clearly see the difference in movies when they make a film based upon one of those fantastic books, the movie is also becoming a classic. Then you have these hyped type of movies that appears to be as good as the classic in the commercials, but when you watch them, they will never give you the same lasting impression, just entertainment for the time being. 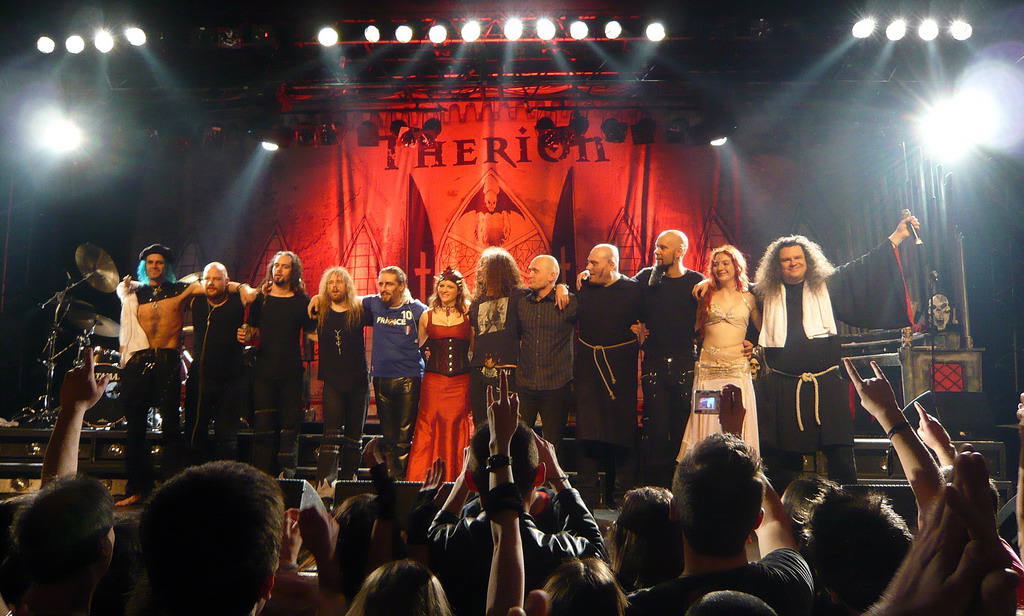 This is also why the follow ups to successful movies  A classic example is The Matrix, such a brilliant film based on a genius story. Then it became a super hit and someone had to shit out a continuation to the story and because it wasn’t spontaneous, both part 2 and 3 became rather mediocre. It’s the same with music. When people use their thoughts and analysis more than they use their hearts and spontaneous creativity when they create music, then they can in best case create valuable entertainment for the time being, but few people will remember them 25 years from now.

Let’s but it this way; the telephone wasn’t invented by someone who sat down and told him self “Let’s try to invent something tonight”, great ideas just hit open minded people when you least expect it. It’s the same when Jimi Hendrix decided to put his fuzz box on maximum while pulling up the volume on the amplifier so that it distorted. He did things the “wrong way” and created a totally new sound out of that. He didn’t sit down and think about what to do that could be original, he just did something, liked it and blew the world away with it.

Therion uses a lot of mystic and mythological stuff as texts and music themes. What are the band members’ relationships to religions? For example I know that you  are a member of the Dragon Rouge order. Are there any mystical “hobbies” else? What about the other band members? Tell a little about it.

Only me have a relation to spirituality and an interest in esoteric matters. I don’t have any other esoteric focuses than DR. The other guys are either atheists or agnostics (as far as I’ve understood it).

Has the band ever had any problems because of it’s music and lyrics theme? Any religious zealots or smth like that?

Not really (besides some immature Norwegian black metal guys disliking some of our lyrics back in 1992).

I think that handling of such volume of information means that you have wide knowledge in this sphere of science. Have you ever tried to write books, or make scientific work?

I wrote a rather thin book back in -94, but I only published 100 copies of it in order to get some feedback. It was too youthful written and then there came other books in swedish that described the same matter better, so I decided not to re-publish it.

What do you think is more important – the history of mystic things, religions an myths or the history of real human actions from the ancient years? Why?

One thing wouldn’t exist without the other I think. If it wasn’t for the curiosity to fin out the mechanisms behind the Creation and Nature, there would never had been established what later became science. But without a science of a more practical nature, there would not have been the progress into the means necessary for an intellectualization of the spiritual matters, books are a great example of that (without writing and physical means to publish it on, all spiritual teachings and heritage would have been based on word of mouth and remained like shamanism can be seen for example among tribes of nature people in the jungle).

Therion’s live shows are amazing. Is it difficult to hold such a show?

Yes, from a technical point of view it’s much more complicated than for “regular” bands, as we have many more singers in the band.

Yes, we need much extra equipment compared to other bands. Especially since we are running everything though in ear monitors (instead of using the monitor speakers on stage), it’s a lof of wireless equipment; guitar/bass, vocal mics and in ear systems.

Tell a little about the best Therion show on your opinion.

I couldn’t name one as the best, just like you could never name one women the most beautiful in the world. Just like women (and men,  from the perspective of the female readers), the quality of women tend to vary a lot and the best of them all have characters and personal variations that can not be said to be “better” than the other, just different. Same with shows, we’ve done a bunch of shows that have been completely outstanding and who will remain dear memories until the day I die, but I could never order them against each other. One of the most memorable ones will always be the first time we played the Dynamo Festival in Holland 1997. That festival was so legendary back in those days, so to play it was a receipt of that Therion now was a band that mattered (the years 1987-1995 the band was an underground band). There’s probably some 5-6 more shows that will always have an extra ordinary place in our memories, though we’ve made several hundreds of shows over the years that have been absolutely fantastic and  yet some hundreds of shows that was very cool too. I think we’re very lucky to have such wonderful fans, the crowd is always 50% of the show  you know.

Therion is very popular in Belarus and a lot of people wait for Minsk concert. What do you wait from it? What shall your fans wait?

We always love to see new places and the slavic cultural sphere has always been very dear to us. We’re extremely thrilled to go to MInsk and play and hopefully there is also a little time left to see something of the city.

0 comments on “Therion: The best ideas are Spontaneous. Interview”Add yours →