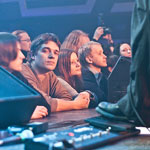 Metalscript.Net met Rune Stiassny and Thomas Jensen of Saturnus just before their gig at “Reactor” club in Minsk on the 9th of March and ask them about the essence of doom metal, the band’s conception, the most unusual show they’ve ever played, about literature influences and of cause about the most important thing every metal-head should take care of.

– What do you think about doom metal: is it a traditional and conservative genre or is it open to different influences?

Rune Stiassny: – Actually, I think one of the bands we’ve heard in here tonight, which name I can’t recall (Re123+ – MS), is fusion between sludge and doom metal. It is kind a special and opened up – a big picture. And my thoughts when I’ve heard it first were: ok, what is that? It’s interesting for doom metal.

Thomas Jensen: – I agree. I really don’t know what to add…

– Ok, and what about Saturnus? Do you play the so-called ‘traditional doom’ or something modern and strange?

– I think we play more traditional in a way like in the middle of the 90s – late 90s. I think we still do. Of course you can hear some newer things too, but we still sound in the way of late 90s like My Dying Bride and early Paradise Lost and of cause Anathema – how can’t I mention them – they have truly been a big influence and still are. So I would say the style for us today is still doom-death as it was meant to be in the late 90s.

R.S.: – Of cause there’ll always be when you suddenly hear some really amazing stuff – mind blowing, awesome feeling – when you hear something like that, you can start wondering, you know, maybe we should try this and get some ideas, just be a little inspired by different things. And it helps you develop somehow, but always stay there where the main inspiration was…

T.J.: – If you listen to our career you can put out songs that actually ‘are not fitted very well’ like ‘All Alone’ and ‘The Fall of Nakkiel’, and ‘For Your Demon’. I would say those songs fit to any other album of a rock band which has love songs for instance. So it is not actually about doom – you can do a lot of things and they are accepted – it is about emotions and feelings.

– And what do you prefer most: death parts of you songs or maybe slow, doomy and melancholic ones?

– I prefer a good mixture of all the things together but the slow parts is ‘more me’. But again I like all the parts, I like up-tempo numbers like ‘Empty Handed’ and ‘Pretend’… because it fits really well and it is not all slow and you have something to vary the feeling.

R.S.: – It can also get to it when the whole concert you play really heavy, slow, really doomy and really dark songs and you have to have a break sometimes just to have something else. It’s like a movie: when you stay in the same room all the time it gets boring. So you have to change the picture sometimes.

– Can I name Saturnus a conceptual band?

T.J.: – Yeah. When we compose and write, we think about keeping a red line – melodic, atmospheric, sorrowful and emotional. If you listen to Saturnus album and you get pictures in your head, you can relax and get emotions – that’s the red line we trying to catch. For example if you listen to our ‘Paradise Belongs to You’ album you needn’t be sorrowful, you can be happy about it. As long as there are emotions and thoughts behind, it doesn’t actually matter what mood you are in. You don’t need to cry while listening. Of cause when you have a depressive period and listen to it you can cry, but there are many different emotions there.

R.S.: – Being happy is an important emotion too, I think.

– Who was the author of the idea to name Saturnus’ album after Paulo Coelho’s novel?

T.J.: – It was our former guitarist Peter. He has really black mind but in a good way. He had actually read the book. At that period we were writing an album and its lyrics fell into the same atmosphere, the same universe. And then Peter came up with the idea: why not call the album ‘Veronica Decides to Die’ and make it like a soundtrack but not a real soundtrack to the novel. Then we got a permission to use this title from copyright owners. And, well, all the lyrics in the album are fit well to the atmosphere of the book. It is not a concept together with the book, but you can compare emotions, you can actually read the book and get the music to have another dimension, but they are not meant to be together anyway.

– You travelled much during the tour and all the time by bus?

T.J.: – So, the only thing we’re missing is a bicycle and maybe a boat!

– Our readers are interested in that old story concerning your gig in a church. Tell us about it in details, please.

– The church we were playing in is really like a Free Church where you are allowed to do much more things than in a common church. It is a Christian church – no doubt about that – and the priest there is maybe a little crazy but in a good way.

R.S.: – It is really an open minded church and they allow many happenings there. They try to open the church for new ways, maybe.

T.J.: – It was The Good Friday and the priest needs artists who “can bring death and destruction into the church to get the atmosphere of crucifixion of Christ”. So our friend says: “I know a perfect band with a lot of emotion, it is brutal, and you can call that death and destruction but in an emotional and beautiful way”. He invites us and we do something together. But then it was a controversy in Denmark because all the bishops there start to grudge: “we can not have a heavy metal band in a church singing “Christ, good bye”… We have to sign a paper where we have stated that we are not going to preach satanic word. We explained that ‘Christ, Good Bye’ is a song about the destruction of the world and they accepted it. But there were a demonstration and really zealous Christian believers tried to ban the show. It was a subject of much controversy on the fan-pages and in the news on television and in the newspapers. And maybe that’s why the attention for the show went that big.

– The most important thing is to support your own heavy metal scene. I say it every time during the interview. Without your own metal scene it gets difficult to discover the foreign scene.

R.S.: – Heavy metal is like a big family all over the world, so the more metal we support in our own countries, the more contacts there will be, and maybe it will grow in more and bigger shows for different foreign bands.

T.J.: – Show up to the shows, support promoters, support bands… Because without people – no music.

0 comments on “Saturnus: “Without people no music””Add yours →