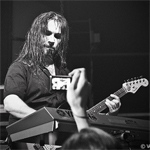 Metalscript.Net spoke to Tommy Talamanca – guitarist and composer of the legendary Italian progressive death band Sadist – after a gig in Minsk. We questioned Tommy about progressive music, the search for creative individuality, why he plays the guitar and keyboards at the same time, as well as other Sadist’s oddities.

– You play both guitar and keyboard at the same time. How much time it has taken you to reach such coordination? Is it difficult to play in this manner? Do you practice much?

I mean, I started to play guitar when I was just a kid and then, when I joined Sadist 20 years ago, I started playing in that fashion. It was funny, of course it was more difficult than just playing guitar, but it was funny… And I still have a lot of fun doing this. That’s why I keep up playing like that.

– So, Sadist is not going to invite another keyboardist or guitarist…

– No, if we didn’t have any keyboard player in the beginning, it will be silly to do it now. And many people remember Sadist as ‘that stupid Italian man who plays both guitar and keyboard’. It’s  funny and it is something that you can easily recognize the band by.

– You are mostly guitar player, aren’t you?

– I started studying classical guitar when I was a kid. Then at 15 I took piano lessons. And after that when I started playing professionally with the band I quit studying because I had no time any more.

– Is it difficult to play prog music at all?

– I mean, I don’t know what prog music means. – For me labels are not so important. I play my music, I play the music we make with the guys of the band and we like it. I don’t care if you call it progressive death metal, thrash metal or whatever metal, we really don’t care about it.

I mean, for me progressive is everything coming from 70s – Rush, Yes, Emerson, Lake and Palmer…

– …King Crimson and others – they were a big influence because we are all almost 40, so we grew up in the late 70s – early 80s and we all have those prog bands in our ear at that time and they were big influence for Sadist. 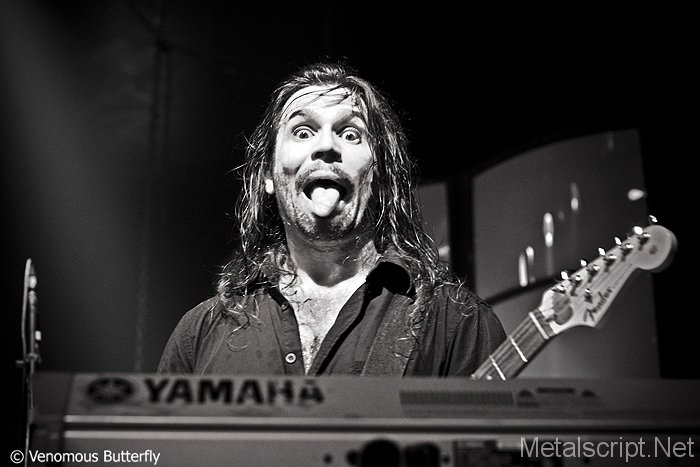 – Do you have any advice for those people, who want to play, let us say, difficult music to make it good?

– What is important – it is the music itself. Not how difficult it is. You can make good music with few notes and you can make such bad music with too many notes.

With Sadist we have never made the point to make difficult stuff because we really don’t care about it. Of course we play a sort of music that is quite strange somehow, but when you hear the melody, it is a melody – you can sing it. To me, if you can not sing it, it is not good music. Of cause it is not like Annio Maricone – the best melodies had been written already by somebody else, it is too late for me – but I try to write good melodies.

– And who is the main composer?

– I’m the main composer. Me and bassist. Playing string instruments Andy and I taking care about notes, you know, and Alessio as drummer cares about rhythms. Then we put everything together.

– You bass player has custom shop basses, hasn’t he?

– Yes, he has two different custom bass guitars. That’s firstly because he is left-handed. And secondly because the parts he plays are unusual for metal bass playing. So far we need bass with good mid frequencies that can sit with the guitar and crazy drums and everything. For us it is very important.

– All those so-called eastern music melodies and rhythms in you stuff… do they really come from East or it is better to say they are Southern or Mediterranean?

– That’s mostly because we are from Italy. Italy is in the middle of Mediterranean, so we got many influences from the south as well as from the north of Europe. And we try to mix them together but at list it has to make sense.

We don’t want to be strange because it is just cool to be strange, we don’t care. We just care about making good music, but with a strong personality.

I mean, what is important to me, when you are listening to Sadist you have to recognize the band since the first note like it happens with the bands like Pantera for instance. Nothing else matters. You may not like Sadist, but when you hear the first note you say ‘hey, they are Sadist’. We don’t sound like thousands of other bands.

– Maybe that’s why you have produced your album Lego yourself?

– Well, since Lego we are always producing all our albums. I have  produced Sadist (2007) and the latest one Season in Silence.

Maybe Lego was not such a good job because we hadn’t had a clear idea of what kind of direction for the band’s sound to seek.  So we wanted to take our time, to stop for a while and think about what was Sadist sound like at the beginning. So far Lego was not the most successful album; there are many people who were disappointed about it. And we are also not very happy with it.

And when we came back with Sadist – self titled album – we were sure that that sound is Sadist sound. We put everything together, you know. All prog, eastern influences, metal – death or thrash… And final result – it was Sadist at its best for us, of course. And I think we are doing it in a good way. We gonna keep like that!