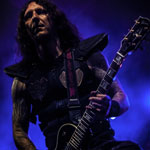 – Why do you take interest in Celtic mythology, not in German one?

– Celtic culture was pretty cool for us because first of all our previous guitar player used to play in an Irish band and he joined Suidakra, so he brought this influence into the band. And the Celts were settled all over Europe up to the Alps so we feel a kind of connection to the culture even thou we are not from Ireland.

We are not interested in German mythology for some reason – I can’t tell you what. Celtic mythology is so various – you have different stories with different moods. It is a good way for us to combine our music with this mythology and also create different concept albums, so you don’t have the feeling that all sounds the same.

– Has anybody in Suidakra studied history?

– There is no particular person in the band who has studied it… I mean, I studied history, but it wasn’t an ancient history, it was a modern one. In Suidakra it is more like personal interest, you know, so we just did lots of research, reading books, because it is like a hobby: if you are just interested in something, you don’t have to study it, you can just do research on your own.

Our plan is not simply to retell Celtic stories, we also add some fantasy to them to make it all much more interesting.

– Do you want to use more traditional instruments?

– When we started with the band, we always were looking for some new inspirations and wanted to keep the sound various. The main thing in Suidakra is metal, but I have always been interested in playing different instruments. So we were lucky to find the bagpiper… I play banjo and mandolin and I am always looking for new stuff to keep it interesting in the future. And I think it is one of the reasons why it still makes so much fun of the nearly twenty years and eleven albums.

– And what about using an orchestra?

– That will be a big dream coming true. But a real orchestra is too expensive, so I work with libraries even to record. One day of orchestra recording costs 30 000 euro, and we can not afford it. Maybe somewhere in the future…

So now I compose all the orchestral stuff with libraries. It is also a real orchestra recorded, but you use it as samples. It gives me inspiration, because when you write music with orchestra you have much more possibilities to do it – you can combine different instruments.

In the metal band you have only guitars, bass, drums and vocals, but an orchestra is so rich of different instruments. You have brass, strings… and so on, so it is a good opportunity to reach new distances in a music way.

– How do you manage to compose all that orchestral stuff?

– I’ve started to deal with orchestral songwriting a couple of years ago. I just read a lot of books and listen to classical and score composers to figure out which instrument parts you can combine how to create symphony and stuff like that…

– Why is it important for you to record concept albums?

– At the beginning, we were just making songs. But I found out that for me it is much more interesting to make concept albums because it is like making music for a movie. You have this flow – the story that is going on. When we are writing a new album we usually have the story already, so I know what to compose in every song and in which direction to move on.

It is kind of hard to compose that way because you are not free to do whatever you want. You can not say: ‘oh, this riff is cool so let’s take it!’ Sometimes it simply doesn’t fit. So you have to do it perfectly on the story. But it is a cool challenge for me and I like this way of working.

Before we start writing, we pick one story and divide it into chapters. Let’s say, if we have eleven chapters we have to write eleven songs. Then we have the summary of every chapter – what is going on in the story – and then we create the music according to it. That is how it works.